What is Data Science and how does it work with Artificial Intelligence?

Today, terms like Data Science and Artificial Intelligence (AI) are often used indistinctly but they're not the same thing. While both are computer science products, many differences between the two actually complement each other to benefit human processes. Thus, the combination of Data Science, machine learning, and AI has become remarkably useful for companies. This article will explain its main benefits, differences, and how you can combine both to leverage all your data resources.

What is Data Science?

Simply put, Data Science is an interdisciplinary field that merges science, mathematics, programming, and statistics to analyze unstructured data and extract useful information from it. In business terms, these analyses aim to answer questions such as: What are customers interested in? What improvements can be made to a given product? How will external events affect people's purchasing decisions? The questions can be endless, but the answers must be specific.

The analysis processes are complex but can be summarized as follows: extracting, manipulating, and maintaining data to make predictions about future consumer behavior and much more. Of course, a solid background in Artificial Intelligence and machine learning algorithms is crucial.

Considered the trigger for a fourth industrial revolution, Data Science was born, as a concept, in 1962 thanks to the statistician John W. Tukey and his famous article entitled "The Future of Data Analysis".

During the following decades, Data Science continued positioning itself on the horizons of academics and engineers to consolidate as an essential science in the 2000s. One of the highlights is Kenneth Cukier's "Data, Data Everywhere", in which he reflects on the role of the data scientist: a person who must combine the skills of a software programmer and a statistician.

Today, companies of all types -from large corporations to insurance companies and banks- use Data Science to predict customer behavior from the very data they generate. Companies can also identify anomalous transactions and uncover areas of opportunity. On the other hand, government agencies use it to glimpse and notify about situations that threaten the security of the population.

What is Artificial Intelligence?

Understanding Data Science as a discipline and Artificial Intelligence (AI) as a tool can help us understand, in broad terms, of course, their main differences.

AI is a set of highly advanced computer algorithms combined to perform tasks that require mental processes very similar to those of humans. For institutions and companies, its role is fundamental when it comes to making decisions based on inferences that are practically imperceptible to people or for working in a non-stop period, something that goes beyond our capabilities.

Its name was coined in 1956 as a proposal for a seminal conference held at Dartmouth. Still, the idea that machines will be capable of emulating our cognitive abilities dates back years and has been dreamed up by both science fiction authors and great names in engineering.

Let's not forget the famous mathematician Alan Turing, who in 1950 proposed a method of inquiry to determine whether a machine is capable of passing for a human: the Turing Test.

Although the dream of super-intelligent machines is still years - probably centuries - away, Artificial Intelligence is already an undeniable part of our lives. We can divide it into two uses:

Today, we use Artificial Intelligence in applications such as Siri and Alexa, task automation in large companies, error reduction and protection of employees during industrial processes, public and private video surveillance, facial and object recognition, innovations in the retail sector, and improvements to customer experiences when buying various products and services. Their possibilities and the benefits they can bring us are increasing all the time. 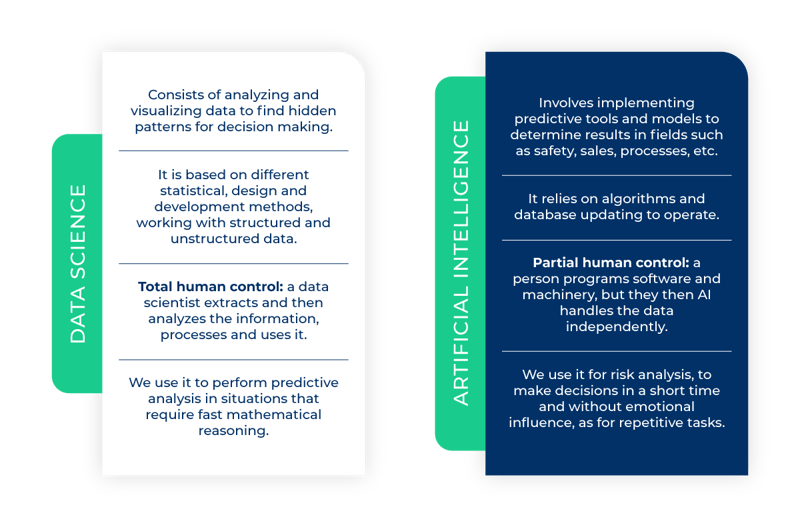 *Data scientists constantly train algorithms in order to more easily understand data patterns and their correlations. One of the major contributions of Data Science to Artificial Intelligence, especially to machine learning.

How can Data Science and AI work together?

The differences between Artificial Intelligence and Data Science do not make them irreconcilable fields, quite the contrary. The statistical knowledge of data scientists combined with the autonomous algorithms of tools such as machine learning can complement each other and bring extraordinary benefits to our society. Let's review some of the most significant examples of this alliance:

We find the footprint of predictive analytics in:

Conversational artificial intelligence improves the answers provided by chatbot services so that machines and customers engage in interactive and beneficial conversations for the latter.

This is a predictive and personal software that observes specific traits in a user's responses (such as location, mood, etc.), collects them, and responds in a more personalized way thanks to the patterns it establishes from these conversations.

In simple terms, this software feeds on business data and transforms it into reports, graphs, charts, tables, and other digestible information for the user. There are three main business intelligence tools that data scientists use to present valuable and understandable reporting:

A breakthrough in artificial intelligence makes it possible to detect abnormal patterns within a data set. It is applied especially in the banking sector to identify fraudulent transactions or by security companies to fight against cyber-attacks.

In the vast universe of organizations that rely on Data Science, Artificial Intelligence or both, the following stand out:

Nvidia:
The computational technology giant, founded in 1993 and with headquarters in California, offers the latest in computer visualization, integrated circuits, and processing units. It features an application that runs dynamic correlations of large data volumes. In addition, the company has a graphic processing unit that provides companies with concrete and up-to-date information.
One of its major advantages is that it allows accelerating data analysis workflows from clouds, laptops, and other certified systems, combining optimized software and hardware.

Oracle:
Oracle Corporation specializes in cloud and on-premise solutions. The secret to its success when it comes to storing and processing unstructured data is the Handdop system. This super tool contains satellite applications that provide double protection for the analyzed data and an algorithm known as MapReduce, which not only extracts information but also sorts and structures it.
Oracle's analytical software has the ability to mine very specific input and its artificial intelligence mechanisms are surprisingly advanced; for many, too close to the processes of the human brain.

Tesla:
This legendary company has, among its many Artificial Intelligence developments, autonomous algorithms that generate highly realistic representations of the world based on large-scale data

As presented in this article, Data Science is the backbone of many of the most powerful technologies we use today. It's the same case with Autonomous AI.

Our Autonomous Artificial Intelligence solutions feed from thousands of data sources and process them to respond to the most critical problems today. This shows that data science is one of the most important fields for this particular work nowadays: without information, many technologies wouldn't be "intelligent":

As data science continues to evolve and more and more technologies are created, we will see tremendous advances in society worldwide.

Read our article here to learn more about how different technologies can work together to create intelligent systems.

And learn more about our Autonomous Artificial Intelligence in our guide here.