How does AI surveillance work? 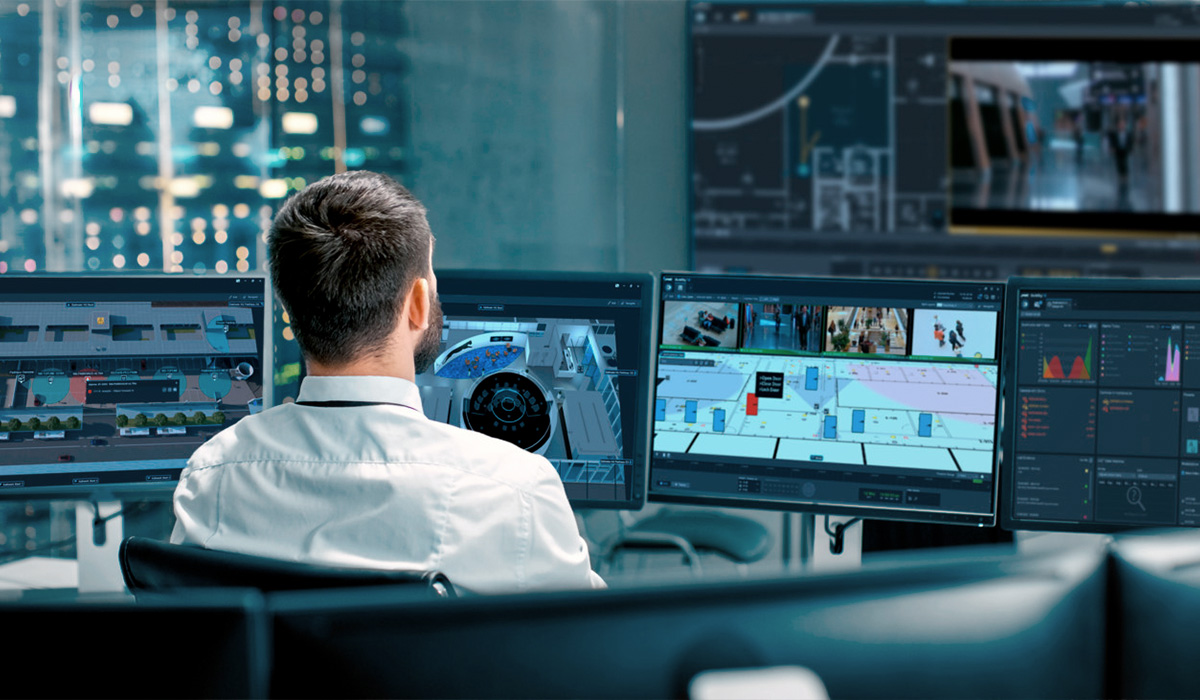 Many states and companies worldwide are adopting the latest technology in Artificial Intelligence surveillance to identify possible threats to their population or personnel and respond accordingly to prevent any consequences. From recognition tools used to detect suspicious criminal activity to algorithms that prevent health threats, the power of AI can help governments and industries assure the safety of those under their responsibility.

At the same time, AI surveillance considers, at all times, the human factor. Not only for the sake of protecting people but also for seeking alternatives to improve their lives.

In this article, we will review the functioning and most outstanding proposals of this growing technology and its impact on society.

The power of Artificial Intelligence in surveillance

For many people, video surveillance is an alien instrument that only benefits those behind the cameras and could even harm ordinary citizens. This perception is perhaps not too far from reality when we look back at the conventional video surveillance of a few decades ago. Today, however, this tool has incorporated Artificial Intelligence at the heart of its activities, and the changes could not be more impressive.

In a broader sense, the new use of these technologies considers the inclusion of multiple actors by providing safer and more pleasant environments for those who have always been the priority of video surveillance: people.

Applied, for example, to public protection policies, AI video surveillance could deploy special attention in marginalized areas where crime is more prevalent. On the other hand, business sectors can provide staff with seamless access and check-in processes or create friendlier customer experiences. 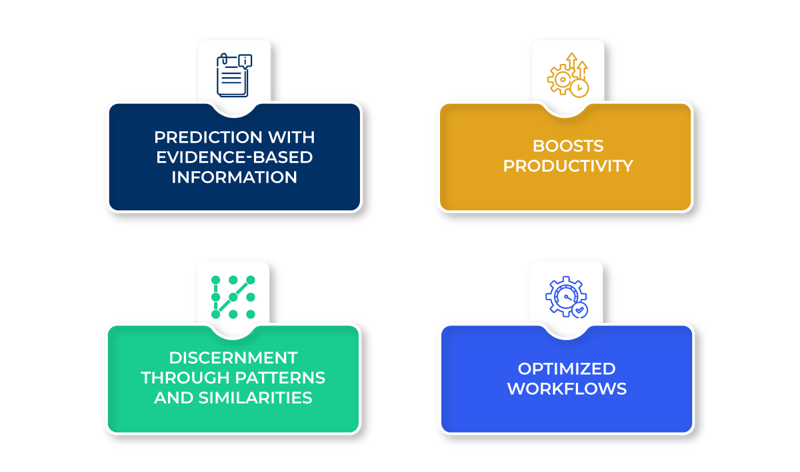 One of video surveillance's main allies are intelligent algorithms which, integrated into video systems, provide users with clear images of likely crime scenes in a given environment. This way, it is possible to react in time when detecting suspicious loitering at perimeters or to pay attention to individuals running in places where this situation should not be common.

If you want to learn more about the origins and functioning of a video surveillance system, read our article here.

Real-world examples of the most sophisticated video surveillance technology can be found in several U.S. cities. The city of Baltimore, for instance, has even displayed a series of aerial drones that monitor citizen activity on a daily basis.

At specific points where wildlife predominates, we can find towers with integrated laser cameras, as well as communications and location systems capable of capturing movement from two miles away. State-of-the-art artificial intelligence then analyzes the captured images and accurately identifies signs of humans and other moving objects.

On the other side of the world, we have examples such as the city of Marseille in France. In 2016, the authorities set up an impressive surveillance network consisting of an intelligent operations center and about a thousand closed-circuit televisions (CCTV) to reduce criminal activity and turn the famous port into the "first safe city" in France and Europe.

What is the secret to success in these cases? Mainly, the aforementioned algorithms are fed by a huge amount of information, such as citizens' arrest records and types of crimes committed, geographic location, and biometric data. It is even believed that these massive collections already allow predicting where future crimes will occur and who will commit them.

The other decisive factor is facial recognition systems; This biometric technology uses multiple advanced cameras to capture still images or videos and compare these findings with the databases that feed the previously mentioned intelligent algorithms. This makes it more than feasible to quickly locate certain individuals and apprehend suspects before it is too late.

Let's turn now to the realm of private or enterprise security. While this sector uses techniques like the ones mentioned above to protect its assets, the focus is now on optimizing its internal processes and shopping experiences.

First, facial recognition operators can much more flexibly identify a company's employees and, more importantly, the areas in which they should be working. Simultaneously, they provide safer, COVID-free workspaces by spotting and alerting collaborators who do not wear their masks correctly. At the same time, intelligent AI algorithms make it easier to respect occupancy and social distancing limits thanks to crowd management systems that count the number of people entering and leaving a defined area. In addition, many companies also have thermal cameras that detect high temperatures and can stop mass contagions in time.

Finally, on the customer side, we find that facial recognition is very skilled at detecting the emotions drawn on individuals' faces. With this great advantage, store staff can quickly deal with dissatisfied people and optimize every stage of the customer journey to ensure positive shopping experiences.

Which countries are using AI surveillance?

AI video surveillance technology is expanding throughout the world at a dizzying pace. As we have already seen, the cases in the previous section are the responsibility of the United States -which distributes its technology to approximately 32 countries- and European Union countries such as France, England, Germany, and Spain, to name a few. It is estimated that around 51% of advanced democracies use secure AI systems daily.

However, the country with the largest reach is China, which currently supplies its AI video surveillance technology to 63 countries. Chinese products typically include soft loans to encourage governments to buy their equipment. Japan, meanwhile, is the second largest Asian country to distribute its innovations to 14 countries in total. 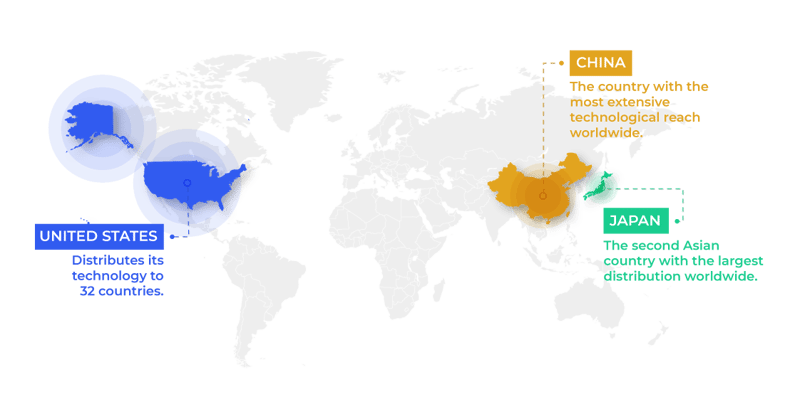 Latin American governments are increasingly adept at using video surveillance. Mexican localities such as Tequila Inteligente in Jalisco, Smart City in Puebla, and Maderas in Querétaro are considered smart cities that rely on AI video surveillance to ensure the safety of their citizens.

What are the best companies in AI surveillance?

Discussing all the companies that currently share their video surveillance solutions with the world could take an entire article. So we will only focus on a few significant examples.

Chinese giant Huawei distributes its technology to at least 50 countries worldwide. It is famous for its super-intelligent surveillance cameras that come with products designed to track and reproduce different transmissions and recordings in real-time. In addition, its data analytics provide statistics and reports on the status of purchased services, ensuring that its video surveillance network is always available to users.

On the U.S. side, IBM has a presence in 11 countries and specializes in national security and military intelligence. It also plays a prominent role in equipping the so-called "smart cities," defined by the World Bank as highly technological urban centers that facilitate the management of a city by gathering real-time information from thousands of interconnected devices. IBM is responsible for the design of an intelligent municipal model that processes and analyzes essential information about city operations. In addition, the company's smart models incorporate sensors, technology, and tracking devices that enhance law enforcement capabilities.

Japanese company NEC has one of the world's most advanced facial recognition systems. Its software, NeoFace® Watch, compares images captured by CCTV cameras against databases to identify patterns with astonishing accuracy. Another interesting proposal from this company is its bird detection system at airports, capable of monitoring avian activity through cameras and radars that broadcast their information in real time. Several airports around the world prevent bird strikes thanks to NEC's innovations.

In Latin America, we have leading companies, such as Algotive, with their autonomous artificial intelligence solutions that leverage video surveillance networks to help people focus on the most important tasks. Algotive's VehicleDRX tool teams up with state governments to respond to one of the most critical problems in vehicle security: motorcycle crime. Learn more about vehicleDRX and its impact here. 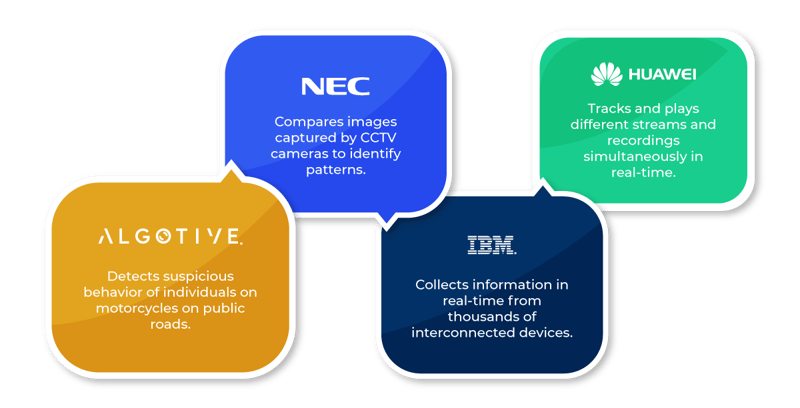 The Future of AI Surveillance

What we can expect of future video surveillance systems are increasingly powerful yet lightweight processors and platforms capable of hosting multiple AI video surveillance solutions. At the same time, we are likely to encounter cameras specializing in massive recordings but making it even easier to access specific scenes in a matter of seconds.

We can also expect these technologies to maintain their prominence in crime fighting but also to extend into other fields such as cybersecurity and, especially, healthcare.

It will be increasingly necessary to shield the cameras and monitoring systems themselves with comprehensive security programs and best practices that include, among other things, consolidation of device data, identification of all users with access to them, and ongoing assessments of all vendors in the supply chain of AI solutions purchased by enterprises.

In the healthcare realm, a global McKinsey survey revealed that organizations would invest even more in Artificial Intelligence to drive safer return-to-work strategies following the COVID 19 pandemic.

We are undoubtedly experiencing a new era in global video surveillance, a more inclusive stage involving authorities, personnel, and, of course, the general population.

Learn more about the technology that drives the AI video surveillance industry in our Definitive Guide to Video Analytics here.